The Mathematics Teachers Association of the Philippines, Inc. (MTAP), was organized to serve as an appropriate venue where mathematics teachers can come together, interact with one another and share each other's expertise in the pursuit of excellence in mathematics education. The incorporation papers were filed on June 9, 1962 and approved on September 27, 1962.

Fr. Wallace G. Campbell, S.J., after a seminar-workshop on Modern Mathematics conducted at the Ateneo Mathematics Department, organized the MTAP. When Fr. Campbell went back to the United States, the Association became dormant. Around 1968, it was revived when a teacher from the Ateneo High School came back from mathematics studies from Boston College, Massachusetts. The Association was active among NCR teachers. Martial Law, declared in 1972, forbade the holding of assemblies. The MTAP once more became dormant.

Around September, 1976, when the Mathematical Society of the Philippines began preparations for the First Southeast Conference on Mathematics Education, the current MTAP president, then a faculty member of the Ateneo Mathematics Department, became actively involved in the preparations. In an effort to know the minds of elementary and secondary mathematics teachers in both public and private schools, the MTAP was refounded on January 15, 1977 at the M. L. Quezon University. Over 500 secondary teachers attended the gathering and elected the officers. Since then, the MTAP has remained active.

In the first seminar-workshop for secondary teachers in May, 1977, the new Director of the DECS-NCR, the late Dr. Anastaco Ramento, was providentially the guest speaker. When the MTAP president wrote him suggesting a cooperative action on the part of the DECS-NCR and the MTAP, he whole-heartedly accepted the suggestion and asked the Regional Mathematics Supervisor, Mrs. Pacita Reyes, to give her full support to MTAP activities.

The Ad Hoc Committee for the Improvement of Mathematics Education in the NCR was organized. It was composed to the MTAP Board Members and all Mathematics Supervisors in the

NCR. From Dr. Ramento up to the present, all DECS-NCR Directors have actively supported all activities and projects of the MTAP and these became known as MTAP-DECS-NCR Mathematics Projects.

Since its refounding, with the Lord leading the way through events, circumstances and people, the MTAP has progressed without fanfare, from one successful project to another: seminar-workshops of different kinds, talks given and paper delivered, Graduate Programs with DLSU and NTC, annual conventions, secondary work-books for first to fourth years, supplementary materials for Grade 1 to Fourth Year, mathematics competitions, Survey Tests for NCR teachers, School Programs of Excellence, Saturday Programs of Excellence for Regular and Mathematically Talented Students from Grade 1 to Fourth Year, the STEDNET, Bulletin, research, Outreach Programs for Mathematics Teachers outside the National Capital Region and Chapters.

In 2002, the MTAP celebrated the 25th anniversary of its refounding at Rizal High School, Pasig City. The occasion was celebrated by a Thanksgiving Mass, a program and an agape at noon. Three of the refounding officers, Sr. I. C. Coronel, Miss Lualhati Marquez and Miss Catalina Lotho, both retired mathematics supervisors of Manila, were present to grace the occasion. The Souvenir Program contains many pictures of the celebration.

One milestone in the MTAP story is the acquisition of its own home, the MTAP Head Office on April 7, 2006 at 039 Oxford Street corner Columbia Street, Cubao, Quezon City. Our home consists of two small apartments and some sort of bungalow that served previously as clinic and residence of a dentist. The building was remodeled to suit our needs.

On August 17, 2006, the Manila Association of Secondary School Mathematics Head Teachers, awarded the president with A Lifetime Achievement Award and instituted the ILUMINADA AWARD to outstanding mathematics teachers in the Division of Manila. On October 24, 2006, together with Fr. Bienvenido Nebres, S.J., Dr. Milagros Ibe and Mrs. Josefina Fonacier, the president was honored as one of the four outstanding mathematics educators in the country.

At the beginning, the office address of the MTAP was the Ateneo Math Department where the president was teaching. On her retirement from the Ateneo in 1991, Stella Maris College became the address of the Association. There the office remained until September, 2006 when the new home was ready for occupancy after being remodeled to suit our needs.

To ensure a better quality of Mathematics Education, the MTAP aims to:

On the whole MTAP is indeed a potent tool in improving not only the teachers’ professional competencies but students’ performance as well. With the collaboration of many other colleagues from different parts of the country, especially the Division Supervisors who are concerned about the performance of their teachers and students, the MTAP is confident that the country will manage to upgrade the quality of its mathematics education. 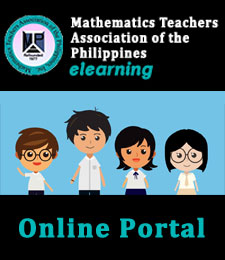